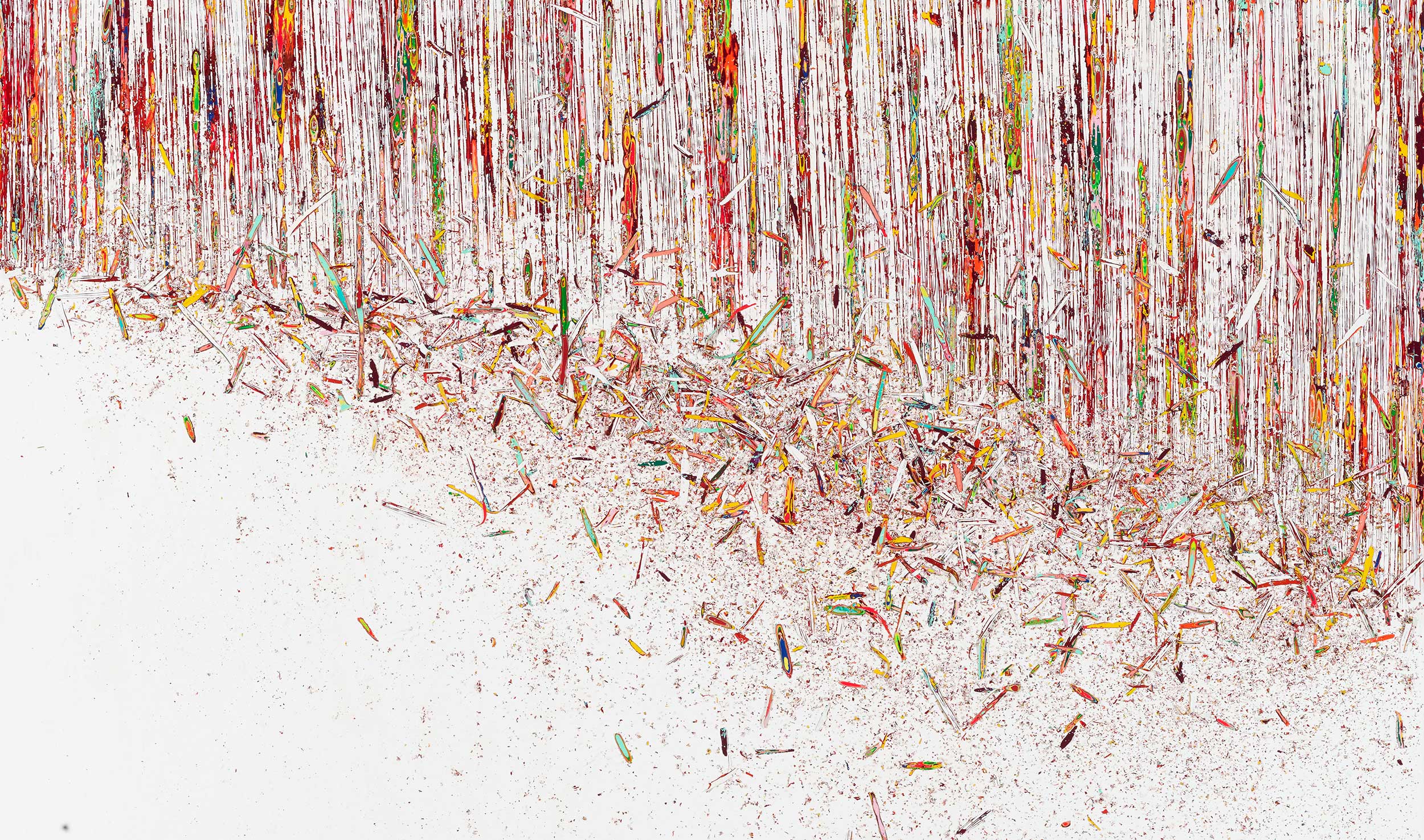 Each of her works resonates with the joy of life. Her paintings feature an array of colours in a sensual and expressive complexity, yet they are made to align to a systematic order. The multicoloured layers of paint often emerge from the ground, or more precisely, from under the colour that covers the multiple coats of paint, revealing a small portion here and there, thus generating colourful and flickering surfaces that are nevertheless imbued with a meditative atmosphere.

These objects attest to the process of their creation, the joy of making them: they are the products of the human hand forming them and allowing them to take shape in the creative process, without preliminary planning. Construction and deconstruction are the characteristic phases in this process: scraping off and cutting into the carefully built up coats of paint, the artist enjoys the unexpected results. It is an activity full of excitement, yielding surprises. The artworks reveal wonderment at the world, and a sense of joy arising in its wake.

When a work has been completed, most artists set about removing any unwanted drips and smears of paint, and waste. Hur Kyung-Ae, however, has chosen a completely different path: she collects the fallen dust of paint and the dry strips of the layers that she has scraped off, and reuses them: she re-pastes them onto the surface of the painting. By doing so, she connects to the train of thought that she has read in Didi-Huberman’s “Genius of Non-place”: the artist inhabits a place, i.e., in her case, the canvas and the world comprised of the layers coating the canvas, which she gradually deconstructs and abolishes. The work, however, preserves all the traces of abolishment and transformation. The artist points to this fact by re-introducing the fallen layers of paint. She addresses the process of creation, which is an experience in itself, seeking to impart her experience to the viewers so that they can also live through the process of joyful creation in their minds.

Such an immersion into the creative process, such a “consuming” of the paintings, is similar to the joy provided by eating colourful cakes. Crumbs and morsels keep falling while you are immersed in the delight of eating them.

On special occasions, such as someone’s first and sixtieth birthdays, wedding or other joyous events, people in Korea make, display and consume similarly colourful cakes. The rice cake called siluddeok appears in the colours of the rainbow on such occasions: this mujigae-ddeok, or rainbow rice cake, as it is called, resembles the layers of paint that the artist applies to her canvases. The ground colour of the rice cake is white, to which colourful layers of various flavours are added.

As Hur Kyung-Ae herself has said, her works are similar to these famous Korean rice cakes: during the process of making the paintings, she eats up, as it were, the colourful layers.

Prepared in a large earthenware steamer, this kind of rice cake is made of powdered rice flour, layered in a similar way by adding various flavours: sweet red bean, red-orange Asian persimmon, fruits, nuts and seeds, and other plants yielding colour. As Hur Kyung-Ae herself has said, her works are similar to these famous Korean rice cakes: during the process of making the paintings, she eats up, as it were, the colourful layers. She has also made such cake forms out of the fallen dust of paint, making reference to such an elemental connection to the joy of eating. The aesthetics of juxtaposed bright colours and monochromatic surfaces has reached a high level of development in Korea. This unique, atmospheric world, achieved with the playful juxtaposition of monochromatic and multicoloured surfaces, appeared especially during the Joseon period, on 15-19th century textiles, in secular and Buddhist architectural painting, in folk paper art, and on folding screens made for special occasions.

Hur Kyung-Ae generates a similar atmosphere in her artworks, kindling the senses of the viewers.