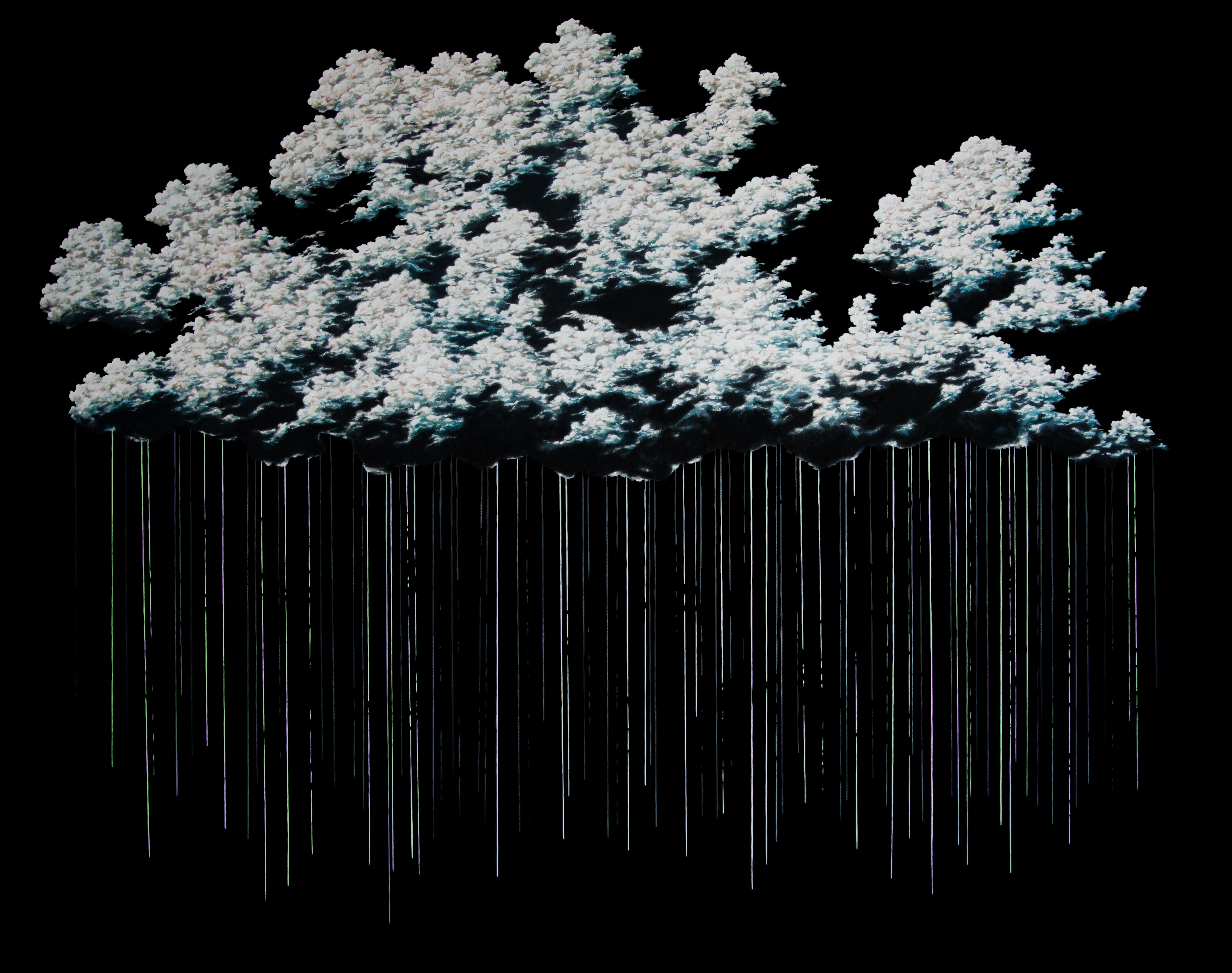 The Cloud Project could be described as a study on the nature of paradoxes, as well as an attempt to reconcile similarities, within the unlimited possibilities that the medium of painting allows. An opportunity for imagination to run rampant.

His work could be described as visual poetry, inherently attached to the most pure and abstract nature of its musicality, it deals with raw feelings and the means to express them in a universal language. When confronted with these works the observer is invited to feel first and reflect later. It is like experiencing the sublime feeling of a storm coming your way, but from the comfort of a safe spot.

João Sineiro is a Portuguese artist with a Bachelor in Fine Arts / Painting, from the School of Arts, Oporto University (2010), who left his home country in late 2012, in search for better opportunities of self-development and with the unshakable confidence to find inspiration in the paths that laid waiting outside of his comfort zone.

Considering himself as an economic exile, he recognizes the enormous struggle for survival, which was ubiquitous in his home country, at the time, as a key aspect of his intellectual development, for it provides a means of “natural selection”, amongst those who react to it and fight for growth and those who just leave themselves in the hands of fate.

These challenges eventually led him to Antwerp, where he established himself and where his art production is currently undergoing. Being a much more vibrant and central city it offers a greater deal of experiences upon which to inspire new work and improve older ideas.

His work is sustained, to great extent, on technical skills. Every object that comes out of his studio is handmade, unique in its nature and irreproducible

It was this adventurous spirit, that is so invariably present in the Portuguese soul, that outlined the primary directives and directions of his artistic path so far, in the sense that core values such as exploration, the urge for discovery, the excitement of finding something new at every corner of the plastic experimentation and the sheer need for constant evolution and perfection, are the common threads that connect past, present and future of his practice.

After a period of struggle to reach the necessary level of stability and infrastructures required to resume working, he is now in the position to fully engage the projects that had been postponed and is working at a steady pace to bring forth his visions.

His work is sustained, to great extent, on technical skills. Every object that comes out of his studio is handmade, unique in its nature and irreproducible, requiring an investment of time and intellectual dedication that gifts them with essential intrinsic qualities of an art work. The technics employed range on the traditional style of painting, but always leaving enough room left for innovation and experimental approaches, resulting in works that always reveal his exquisite capabilities to manipulate paint into his will, whilst the conceptual part of the selected subjects is directly related to more contemporary aspects of life and the modern world we live in today.

Every painting, or series of paintings, is dedicated to analyze a very specific aspect of an apparent conflict or contradiction within the many systems and paradigms that operate and give shape to our world. It is the artist’s belief that there is no such thing as a true paradox, for each and every one of them derives from the exact same structure of thought, implying that apparent opposites are, in reality, one and the same thing, just in different degrees of a scale, thus the ever present possibility to achieve a reconciliation exists in the intrinsic nature of the problem itself.

These early paintings of the Cloud Project derive from an association with the idea of the internet cloud, as it still presents itself, for most of us, with an extended degree of mystery and misconceptions.

The choice of the cloud as an object of study to explore this idea is a challenge to see how far one can induce determined feelings and mental states on the observer, relying only on semi abstract bodies, by means of composition, form and color, straightforward core values of painting itself. Clouds are a part of the natural world, but they are shapeless, unstructured and purely abstract in their visual qualities, which makes them an ideal subject for this purpose. Adding to this is also the notion of change and constant mutation that is invariably attached to them, spawning the first of the paradoxes, for painting is a crystalized moment in time and will not suffer from common transformation agents.

These early paintings of the Cloud Project derive from an association with the idea of the internet cloud, as it still presents itself, for most of us, with an extended degree of mystery and misconceptions. When considering this subject, some very pertinent questions rise, such as: what is the nature of the cloud? Who controls it? How does it work? Who as access to it? What impact does it have in our lives and how can it influence our perception of the world?

It is in the duality of meanings and interpretations that resides the true nature of these paintings. All sub-products of human activity can be interpreted in firmly opposite ways, leaving to us the required need to judge, categorize and label them.

2002 – Colective Exhibition of Fine Arts, at the Barcelos First Youth Show, by the Town Public Library, in Barcelos, Portugal.

2010 – Collective Exhibition, in celebration of the Twenty Fifth of April Revolution, at the Barcelos High School, Barcelos, Portugal.

2011 – Sculpture production / installation and performance director at “Ambientalidades” Festival, by the Enfarte Collective, in Bragança, Portugal.

2012 – Film Show “Contacto” (Contact), by the Enfarte Collective at the NAA Festival, in Barcelos, Portugal.

2012 – Solo Exhibition “A Mudança que Veio de Cima” (The Change Wich Came From Above), at the Smente Art Gallery, in Barcelos, Portugal.