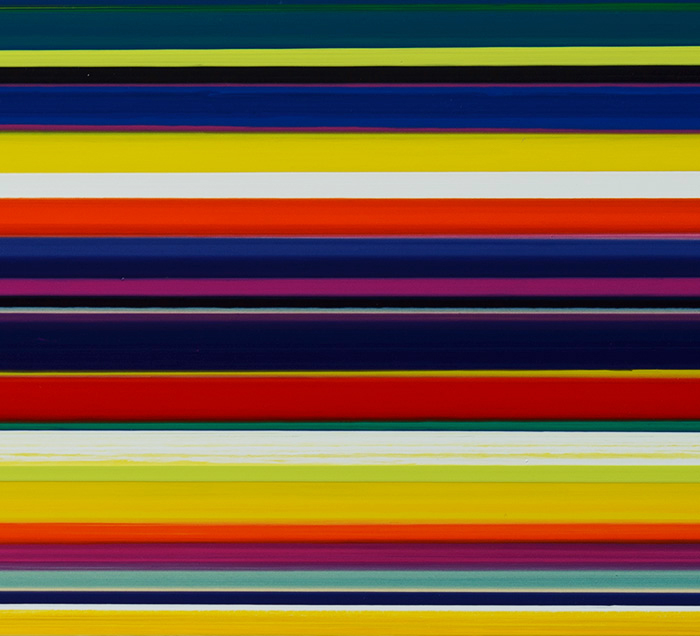 "Before anything else, my paintings constitute a radical experimentation with materials and my permanent need to push the limits of the binding agents and lacquers I use"

The paintings and objects by Thierry Feuz are a neo-baroque journey in times of post-modern enlightenment. It is neo-baroque because the works are full of opulence, movement and emotions.

It is a journey because the associated themes circle from the universe with stars and galaxies to life-size flowers and zoomed blossoms to micro-cosmoses and nano-worlds; it is post-modern because the artistic concept plays with fragmented and deconstructed elements of memory and culture; and finally it is enlightenment because the pictures open the view through a focused rationality to new and complementary realities.

The painter Thierry Feuz (born 1968), an Austrian native who is based in Geneva, broke through on an international level at the start of this century with his striking and extraordinarily vital canvasses.

Through powerful colours and gestures they evoke a natural world that is simultaneously bathed in an alien and tantalising artificiality. He uses car paint, a rarity in the world of painting, to give his paintings a high-gloss finish that implies he views the natural world from the perspective of our artificial and urbanised existence. The resulting fantastic works have been divided up by Feuz into a magnificent series, each with their own character.

The perfect and balanced compositions, the thrilling and audacious color combinations, the use of strong and pure paints, the clarity and cleanness of the structures, the elaborated design of the single painted elements, and the lack of classical perspective, the depth of focus by means of the blurring of some depicted elements are inherent parts of all works. Because the images always oscillate between abstraction and figuration, there is no direct narration but a lot of space for interpretation. Nevertheless the bright colors are spreading out on the canvas like a firework and are generating either biomorphic shapes or, in another series of paintings, geometric horizontal lines. The fascinating pictures with its color explosions and psychedelic plays of colors leave a deep impression without the understanding at first sight what is going on.